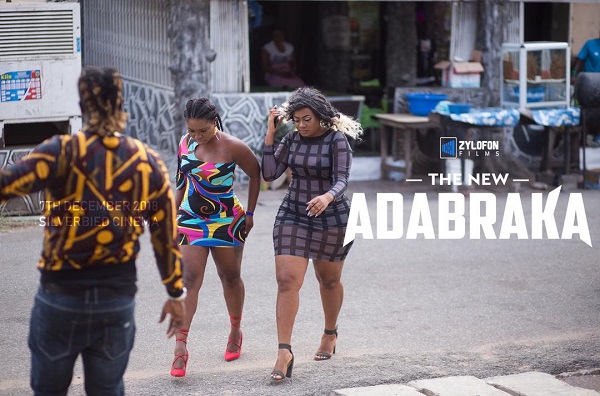 After a long wait, Zylofon media’s movie wing, Zylofon films is ready with its first ever movie production.

The public has been in anticipation for a movie from the media giants since its inception.

The signing of acts such as James Gardiner, Bibi Bright, Toosweet Annan, Zynnel Zuh and Benedicta Gafah was enough evidence that the outfit would delve into movie production.

The Acts were hit location some months ago and are ready with first movie under zylofon films. The title of this movie is” The New Adabraka”

The current economic challenges in the country have led a lot of young men into self-destruction. While a few employed toil to make a cedi, many of the youth are taking shortcuts to make money through any means and one popular trade among the unemployed youth in Ghana is internet scam. Zylofon films finally present their first movie titled, “The New ADABRAKA” which depicts the state of the economy.

They don’t only lack money but have lost respect among their friends. For this, they visit the holy shrine of MAMA GLIZDI but the task involved before their riches is horrendous and yet ends in embittered consequences.

“The New ADABRAKA” is scheduled to be premiered on 7th December, 2018 at the Silverbird Cinemas- Accra Mall & Westhills Mall at 7PM & 9:30PM at a rate of GH?40.00. Red carpets starts at 6PM at the Accra Mall. Don’t miss out on all the intrigue and excitement!