According to MTO, the woman Offset was cheating on Cardi with is now pregnant. Offset and Cardi split two weeks ago after Cardi caught him allegedly cheating on her with an Instagram model named Summer Bunni. Well, now it turns out that Offset’s alleged side chick is pregnant.

MTO News obtained exclusive text messages between Summer and her friend where she confirms that she’s pregnant. She doesn’t specifically name Offset as her baby’s father. But she is reportedly 9 weeks pregnant – meaning she conceived in September. According to Summer’s previous statements, she was messing with Cardi’s husband around that time.

Here are the texts where Summer worries that the stress from her new fame may negatively affect her pregnancy. 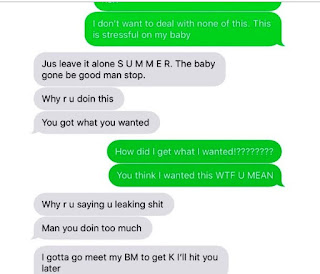 Though fans initially hoped the breakup was fake news, a source previously confirmed to PEOPLE it’s the real deal, adding, “they have obviously had huge problems for a long time.” In the video she posted (and subsequently deleted) announcing the split, Cardi herself alluded to the fact that the pair were trying to work through their issues “for a hot minute now.