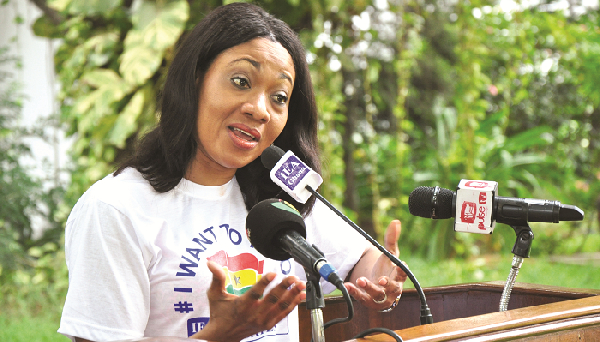 Chairperson of the Electoral Commission (EC), Mrs Jean Adukwei Mensa, has revealed that the reversion of the Commission’s logo to the country’s coat of arms and a ballot box showing the hand casting its vote cost about GH¢16,000.
The Commission on December 4, 2018, dumped the multi-coloured logo which was championed by its immediate past chairperson, Mrs Charlotte Osei.

According to the EC the decision to reverse to the old logo was because it depicted the core values of the Commission, namely integrity, Fairness and Accountability.

Following the restoration, sections of the public raised concerns over the cost involved.

But Mrs Mensah assured that not much changes would be made at the offices of the Commission.

“It’s important to note that it’s not a branding exercise. The old structures of the Commission still bear the logo and therefore the only change that has come up is change in letterheads and that has cost… I think it’s been well below GH¢16,000,” she said in an interview on Accra-based Joy FM.

Mrs Mensah also stated that she has received positive feedback since the restoration of the Commission’s old logo.

She said, “I received a statement from somebody in the streets and the person said to me that madam Electoral Commissioner, thank you for restoring the original logo. This is national pride restored. People have it, they can relate to the old logo.”

“The change resulted from demands from staff themselves that the original logo represents the commission and what it stands for,” she added.

Speaking on another platform, Mrs Mensa said her appointment as Chairperson of the EC came as a pleasant surprise.

She stated, nonetheless, that she felt she had taken a wrong decision to accept the appointment because she was on her way for her Sabbatical leave when she had a call from the presidency.

“It was surprising and this was something I had not expected,” she said on TV3’s Today’s Woman.