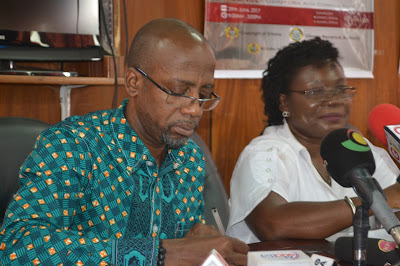 The Ghana Music Rights Organization (GHAMRO) has called on the Ghanaian media to Assist them fight against piracy and also help build a vibrant music industry. Addressing the media at the media workshop in Accra last Thursday Mr Rex Owusu Marfo popularly known in showbiz arena as Rex Omar, Reacting to a question concerning music usage in the church Mrs. Diana Hopeson and the chairman Mr. Rex Omar “unfortunately in our part of the world dealing with the church is very delicate so Ghamro is putting plans in place on how to approach church royalties and very soon the public will hear from us ” they noted.
Also speaking at the workshop the Administrative Manager of GHAMRO, Mr. Abraham Adjetey, lamented on the role of the media in combating piracy, he said his outfit had taken initiatives to eliminate the issues of unauthorized duplications depriving right owners of their entitlements. Mr. Adjetey urged the media to support the campaign to clamp down on websites that illegally upload music for public use. He called on the government to effectively enforce copyright laws to protect and defend right owners. He further implored the media to use its medium to convincingly educate the public to pay for the commercial use of  Ghanaian music.
According to the board chairman, Mr. Rex Owusu Marfo, most of the challenges bedeviling the organization would be addressed through education. Mr. Marfo said, building the capacity of the media would open them up to the operations of a Collective Management Organization (CMO), adding that, it would help educate commercial users of music to pay for the use. He posited that considering GHAMRO’s quest to reposition and market its corporate brand, the
media’s contribution could not be underestimated. The Chairman out doored new committees established to assist the board in delivering its mandate. The new board of GHAMRO would organize its maiden Annual General Meeting on July 27, 2017 at the Great Hall of KNUST in Kumasi. Other board members present at the workshop were the First Vice Chairman, Alhaji Banda (Bandex); Second Vice Chairperson, Diana Hopeson; Nana Tuffuor, Nana Kweku Duah (Tic Tac), Augustina Addison, Rev Francis Boahene, Ernest Enning, among others.