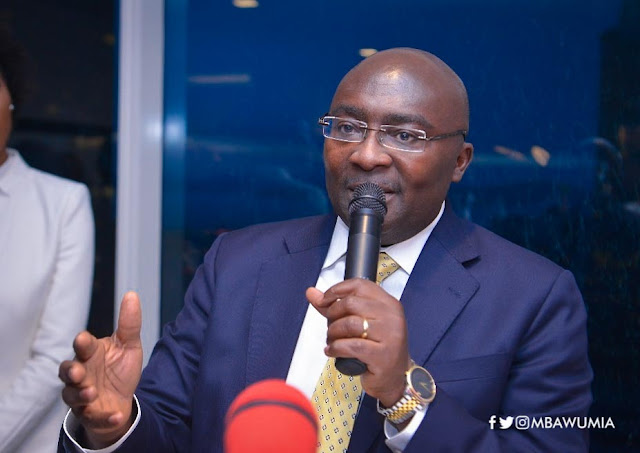 Twenty two months into the administration of President Nana Addo Dankwa Akufo-Addo, Ghana is on the rise again, with prospects for growth and development bright, the Vice President of the Republic has stated.

According to Dr Mahamudu Bawumia, ongoing structural and policy initiatives, including a commitment to transforming the Ghanaian economy through the use of technology while paying greater attention to human resource development, will set the stage for a brighter future for Ghana.

“By any stretch of the argument, if one looks at the progress made in the last 22 months there is no doubt that Ghana is on the rise again. The Nana Akufo-Addo government has implemented policies and programmes that have had a direct benefit on the life of the ordinary Ghanaian, while dealing with the challenges that we inherited as a Government.

“For instance, through the implementation of the Free Senior High School (FSHS) programme, thousands of Ghanaian teenagers who otherwise would have stayed home had access to secondary education. In 2017, FSHS provided over 90,000 additional teenagers an opportunity to get senior high school education and improve their opportunities for work in the future. In 2018, we have been able to accommodate 181,000 more students who otherwise could not have access to secondary education.

“We are more than convinced that the future can only be bright and we keep higher hopes. We can only thank God Almighty for how far he has brought us as a nation. ”

Vice President Bawumia, who was giving an overview of the Nana Akufo-Addo government’s performance to the Ghanaian community in Lebanon on Tuesday 20th November, 2018 as part of a three day visit, said the administration would continue to think outside the box to make Ghana an example to the rest of the continent.

Dr. Bawumia stated, among others, that such macroeconomic improvements led to the upgrading of Ghana’s credit rating for the first time in ten years from B minus to B with positive outlook by Standard and Poors, a global ratings agency.

“My assurances to you all and all Ghanaians are that your economy is in competent hands and there is more to come under the visionary leadership of Nana Addo Dankwa Akufo Addo.”

He continued,
“Today, Dumsor is not killing people’s businesses. Unemployed graduates are being employed under a special vehicle called NABCO. Nursing and Teacher trainee allowances have been restored. Government is paying the registration fees for BECE candidates. Parents are not paying for senior high school fees. Electricity tariffs have been reduced for both business and individual use.

“These are things that did not exist before we came into Government and, if we had not addressed them they were going to compound the hardships on Ghanaians.”

Ghana, Vice President Bawumia indicated, is on the rise again, and urged Ghanaians domiciled abroad to contribute their quota to the success story.