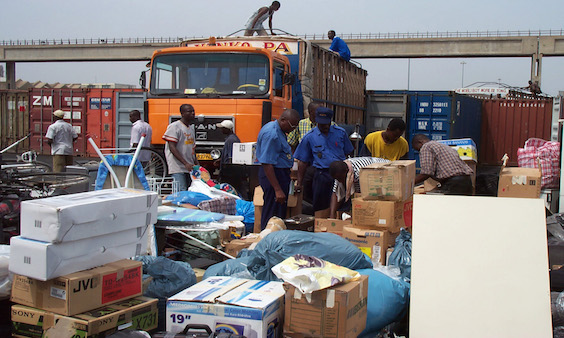 The Customs Division of the Ghana Revenue Authority (GRA) has been able to recover GHC3.9 million from offenders of transit goods regulations.

The amount, which was collected between January and September this year, is an accumulation of duties and penalties charged importers and clearing agents who diverted transit goods onto the Ghanaian market.

Transit goods do not attract any duty in Ghana because the goods are not meant for the local market or to be consumed in the country.

However, some of the owners of the transit goods divert them onto the Ghanaian market for consumption.

Transit goods include goods that have departed their dispatch, loading, or shipping point but have not yet arrived at the receipt, offloading or delivery point.

In an interview with the Daily Graphic in Accra, the Assistant Commissioner of Customs in charge of Transit, Mr Emmanuel Tetteh, said some clearing agents and importers of transit goods diverted their goods to the local markets for sale.

He explained that Customs, as part of efforts to ensure that no transit goods found its way onto the local markets in the country, had set up an Integrated Monitoring Team (IMT) to deal with the offenders.

He said the IMT were stationed at the Customs warehouses, particularly those at the Tema Ports and Accra to supervise the loading of goods onto loading trucks so that it would be in the know of the number of transit goods that left the country and the number of said goods that got to their destination points.

According to Mr Tetteh, many of the transit infractions occurred at the holding place through to the exit point, adding that the IMT monitored the journey of the transit goods from the Customs warehouses until they left the country.

He cautioned that all individuals, particularly importers and clearing agents who diverted transit goods onto the Ghanaian markets would be severely punished when caught.

“If you are caught, you will be punished,” he said, adding that Customs was taking every necessary step to ensure that individuals who denied the state of its needed revenues through fraudulent means were brought to book.

Mr Tetteh said IMT would continue to track the activities of transit goods, warning that the IMT had devised several strategies to seal all revenue leakages in the system.

He has, therefore, urged the public to assist customs in bringing to book individuals who smuggle goods meant for foreign consumption to the local markets, saying “we pay informants.”

According to him, Customs had instituted rewards for all informants whose information might lead to the arrest of smugglers.

Mr Tetteh pointed out that it was through the reliable information volunteered to the agency by the public that would help the service to weed out all miscreants from the society and increase the country’s drive in revenue mobilisation.

Head Office Of Surfline Closed By GRA Due To Unpaid Taxes