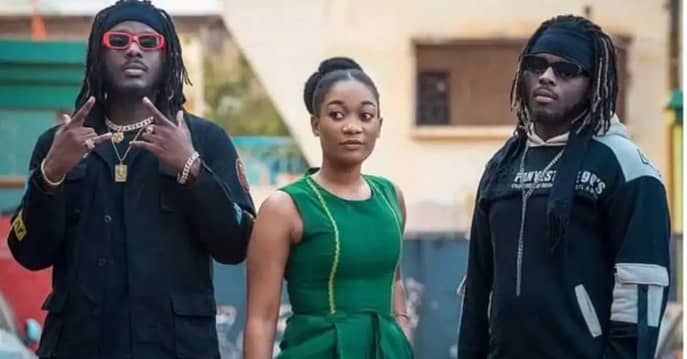 Adelaide The Seer Narrates How She Was Mistreated By DopeNation.

Adelaide The Seer, a young visually impaired singer discovered by music duo DopeNation, has disclosed that she is no longer working under the group.

DopeNation launched an initiative to help five upcoming artists and Adelaide Naa Borley Bortier Afutu was the first to be chosen among the list.

“Everybody saw me out with them some months ago and this was because they were running a promo; they were giving beats to five up-and-coming artistes and they chose me first; so that is when we did ‘Wire Me’. So after Wire Me, it got interesting and that’s when we did ‘What A God’; and there’s one more song that hasn’t been released,” she said in a recent interview.

The music group took the young talent through training and brand coaching to become a budding singer she is now but Adelaide says her stay was not that okay under the group.

Adelaide said her stay with DopeNation was on contract basis and now that the contract has ended, she no longer wants anything to do with them.

The 25-year-old singer said due to health issues and other personal matters, she decided not to renew her deal with the group but they have taken offence and prevented her from accessing some of her stuffs.

“It wasn’t really an issue. I had to go on a health break. So considering the break and everything around me, I felt I shouldn’t sign because it was going to come with a lot of responsibilities so I just had to pull out,” she said.

Adelaide claims she has been denied access to all her social media account because the twins have seized them.

Watch the full interview for more.

Kuami Eugene beg Ghanaians to Use local songs for their Tiktok videos.

The Lynx Music signee and ‘Angela’ hitmaker, Kuami Eugene, has called out social media users who are usually seen jamming to other nationals’ songs on Tiktok to equally do more videos with Ghanaian songs.

According to the ‘Rokstar’, most social media influencers especially on Tiktok are not often seen using Ghanaian songs or not involved in song challenges from Ghanaian artists. READ full story here

Thank you for reading “‘Adelaide The Seer Narrates How She Was Mistreated By DopeNation” on Ghbestpromo.com