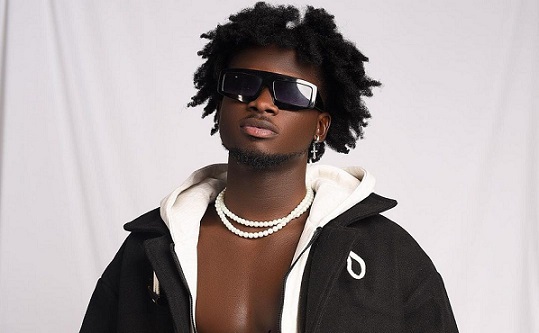 Kuami Eugene beg to Ghanaians to Use local songs for their Tiktok videos.

Lynx Music signee and ‘Angela’ hitmaker, Kuami Eugene, has called out social media users who are usually seen jamming to other nationals’ songs on Tiktok to equally do more videos with Ghanaian songs.

According to the ‘Rokstar’, most social media influencers especially on Tiktok are not often seen using Ghanaian songs or not involved in song challenges from Ghanaian artists.

“Our old folks did their best with highlife, the fact that we have a genre called Highlife which was maintained by our older folks, we shouldn’t discredit them for their contribution, it is our job to carry on the legacy. Currently, we have social media market, we are doing Tiktok and Snapchat these days, our focus should be to entice people with Ghanaian music when they are doing Tiktok and Snapchat”.

He added that “So much is expected from us from the next generation, and if we fail, we should make no excuses. High life should be our first priority as Ghanaians”.

Mr. William Addo has joined the list of veteran actors to seek public support, as he is pleading with benevolent individuals to help him acquire a corn mill to start a business.

The 70-year-old veteran actor, who disclosed that he had suffered cardiac arrest months ago, said he wants to start a corn mill business to foot his medical bills.

Mr. Addo, who now resides at Tefle in the Volta region, explained that this corn mill business will provide a sustainable source of income to take care of his needs. READ full story here

Thanks for reading “Kuami Eugene beg to Ghanaians to Use local songs for their Tiktok videos” on Ghbestpromo.com