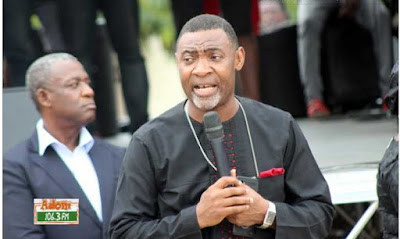 Economist and Evangelist, Rev Dr Lawrence Tetteh has revealed that he bought the casket for the burial of late Dancehall artiste, Ebony Reigns.

“I have been hearing some people being acknowledged for their contributions to the funeral, but I paid for the hearse and mortuary fees…,” he said.

The Man of God preaching at the funeral of late Dancehall artiste, Priscilla Kwateng known in showbiz as Ebony Reigns said he paid for all these things because he saw the funeral as a crusade to preach Christ to the unsaved.

“It is not because I don’t know what to do with my money but because I see this programme as an opportunity to speak to you about the love of God…,” he said.

The celebrated Man of God ceased the opportunity to call people to repentance stressing that Christ is the only one who can save them from their sins.

One sentence after the other, the Man of God who claimed he led Ebony to recite the sinners’ prayer 72 hours before her death reminded the stars at the funeral that they can’t make it in life without Christ.

The funeral is still ongoing at the forecourt of the State House in Accra.