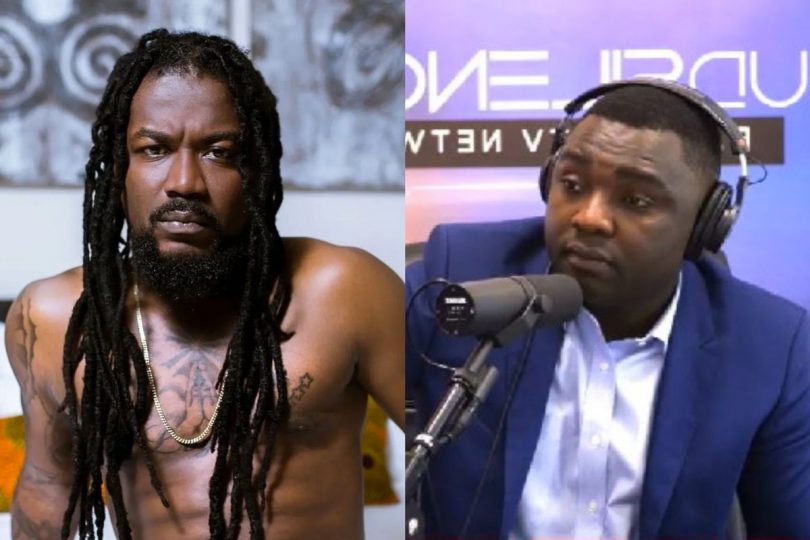 Dancehall musician Samini has once again slammed Kevin Taylor following some remarks the US-based social commentator made about him.

Kevin Taylor in November launched a scathing attack on Sarkodie, Samini and Lucky Mensah for endorsing the Nana Addo Dankwa Akufo-Addo and urging Ghanaians to give him a second term as president of the country. Taylor labeled the trio as “stooges” and questioned the rationale behind their decision amid allegations.

“As for Samini, you’re just going round giving birth with different women anyhow. Even the village where you hail from lacks potable water and yet you campaign for the wrong party. Now look everyone is suffering”, Kevin Taylor stated on his ‘Loud Silence’ show.

On Saturday, December 18, 2021, Samini addressed the issue on UTV’s United Showbiz and served notice of his intention to deal with Kevin Taylor. He described the claims as “lousy”.

“…If I want to sue him for all these things, he’ll be sorry. Even the person you claim I have a child with is not my wife. I don’t have a child with her… He said a villager like me have grown wings enough to join a political party whiles my hometown roads have not been fixed.

“Everyone knows I was born in Accra and till now I’m even trying to reconnect with my Wa people. I’m waiting for him to arrive in Ghana and he’ll explain to me the lies he spewed about me. He will tell me whether he has the right to address me in that manner”, Samini said on UTV.

Samini who is on a media tour to promote his ‘Samini Xperience Concert’ slated for December 24, 2021, at the Grand Arena, Accra, once again tackled Kevin Taylor when asked about the banter. The musician denied the accusations while elucidating his decision to rally support for Nana Akufo-Addo.

He remarked that: “If you want me to think about those people, how am I going to get anything if I don’t step up to the table and be part of those who change the narrative, those who work to actually change the system? If I have the ambition to be a politician to be able to represent one of the poorest and farthest ends of the country and you’re saying I should think about them, ain’t you contradicting yourself? What are you saying?”

“If you’re going to attack my decision and why I did that, and you’re going to move away from that into my personal life and talk about things about me that are not authentic and true, I think that one nice day…

“Maybe I’ll be interviewed on that platform of his because he interviews guests so that he’ll ask me these questions then we’ll see how we can address them because I think he sounds like a decerning person who should know better instead of throwing stuff in the air just like that. It doesn’t make sense”, Samini added. – source: Desvid