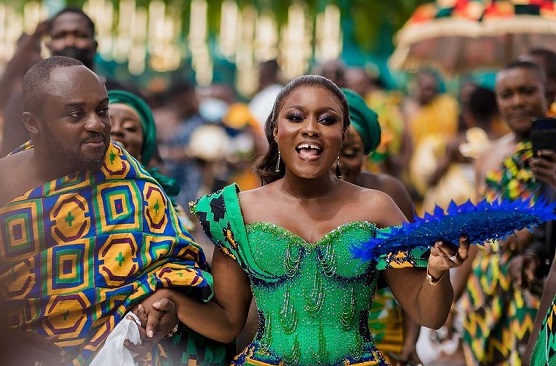 • The ceremony came off in Kumasi

• It was a lavish wedding

It was a total shutdown of the regional capital of the Ashanti Region, Kumasi, on Friday, November 5, when Barima Osei Mensah, owner of Adrinkra Pie, tied the knot with Anita Sefa Boakye.

Their customary marriage was a combination of style, elegance, tradition and the display of the Ashanti culture. It was a ‘kente’ affair as almost all the guests at the ceremony were adorned in rich Bonwire kente.

The bridal team comprising bride’s maids and groom’s men were not left out as they were all spotted in kente cloth.

Videos and photos that came out of the customary marriage got Ghanaians talking right from the wedding vendors that were on board to the efforts that went into pulling off the grand wedding.

It was an entire carnival in Kumasi as persons who were invited to the ceremony made a bold fashion statement.

The outfits worn by the bride, Anita Sefa Boakye who is the daughter of the owner of Anita Hotel in Kumasi was one to behold.

Here are some memories captured by Jema Photography and Focus&Blur:

Thanks for reading “CEO of Adinkra Pie and Anita Sefa Boaky wedding” on Ghbestpromo.com