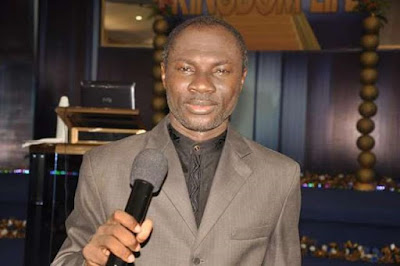 The founder of Glorious Waves Chapel international Prophet Emmanuel Badu Kobi has threatened to beat up any rep from the Ghana Revenue Authority who turns up in his church collect tax from his church.

There has been an ongoing discussion as to whether to tax church in the country after a government official revealed that there are plans been put in place by the government to start taxing various churches in the country.

Some Pastors have shared their displeasure towards the new directives whiles others have expressed their willingness to pay so the government can use it to develop the country.


But Prophet Badu Kobi in reacting to the issue in church stated emphatically to beat up any GRA worker who come to his church with the intention of taking money as tax.

According to the Man of God who has made his intention not to pay tax on several platforms revealed that, after the 2016 elections, one politician called him on phone and told him about a colleague politician who is on the verge of dying and he assured that person that no one was going to die because he has prayed for him.

Fast forward today, that same person has the guts to interfere in church matters and asking them(churches) to pay tax. He also added that he won’t sit down for any politician to use the church for their politician gain and if no man of God would fight the politicians he would in his own capacity to fight them.

He further added that the nation should pay them(Pastors) all the monies they have given out to people who are in need and if they are able to do that then they would also pay the tax without complaining.