Afari Djan Admits Being Unhappy With Happenings At The EC 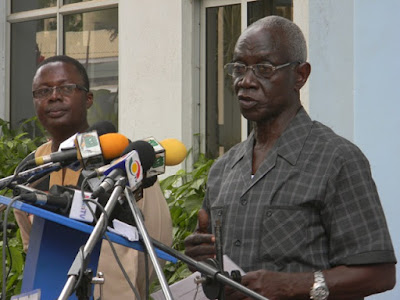 Dr. Kwadwo Afari Djan, former Chairperson of the Electoral Commission of Ghana says he is as unhappy as every Ghanaian at recent events at the commission.

Dr Kwadwo Afari Djan who chaired the EC for over 20 years and supervised six successful elections is worried the reputation of the organization, respected across Africa, stands to suffer under the current circumstances.

“I would think that nobody is happy is happy with what is happening at the Electoral Commission,” he revealed, referring to the accusations that were thrown at the immediate past EC boss and her eventual firing.

The successor to Dr Afari-Djan, Charlotte Osei has been removed by the president on the recommendation of a panel set up by the Chief Justice to investigate a petition brought against her.

Some staff of the EC who authored the petition to the president accused her of corruption and mismanagement among others.

In his discontent, he added that”nobody would be happy. If you are unhappy, I share the same feeling with you.”

Speaking at a forum titled ‘Consolidating Ghana’s democratic governance: The role of the Electoral Commission’, the former EC boss regretted the turn of events. He wants the newly appointed chair of the EC to restore the sunken image of the election body.