We Will Not Favour Homosexuality– Akufo-Addo 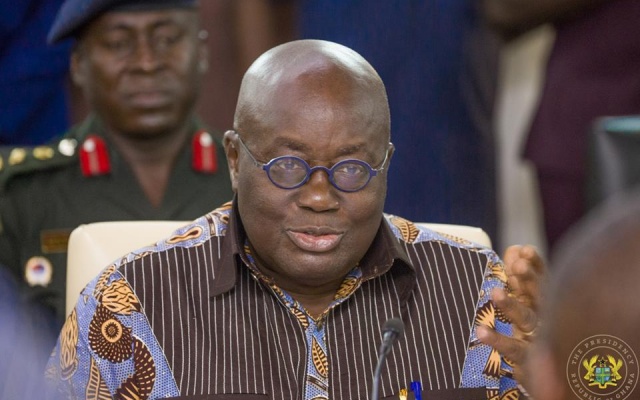 President Akufo Addo has once again laid emphasis on his administration’s decision against same sex marriage in Ghana.

While speaking at the Global Evangelical Church of Ghana’s Synod which was held at the University of Ghana, Legon, the president asserted the act is against his beliefs as a committed christian and will not do anything contrary to those values.
He said:

“I do not hesitate to state openly that I am a Christian in politics and will continue to be so and a politician who is deeply influenced by Christian values. I know that the church can be very influential in making a dramatic difference in education, health, and sanitation.
“Let me assure that this government has no plans to change the law on same-sex marriage, we have no authority, and we will not seek any authority to do so,”

President Akufo-Addo faced backlash last year when most Ghanaians accused him of not being definite enough on the same-sex question in an interview with Al Jazeera.

Asked why homosexuality remained a criminal offence in Ghana, the president said,

“I don’t believe that in Ghana so far a sufficiently strong coalition has emerged which is having that impact of public opinion that will say, change it; let’s then have a new paradigm in Ghana.”

He added that like in other parts of the world, it will take the activities of groups and individuals to try bringing it up for discussion.

“At the moment, I don’t feel and I don’t see that in Ghana there is that strong current of opinion that is saying that this is something that we need to even deal with. It is not so far a matter which is on the agenda.”

Ghanaians did not take lightly to his response, but the president on many occasions has clarified the comment and stressed at various platforms that the act will not be legalized in Ghana.

He is not alone. The Speaker of Parliament and some Members of the House have openly stated their distaste towards the act and have also assured that it will not be legalised although there have been from persons like the UK’s Prime Minister, Theresa May for this to be done.