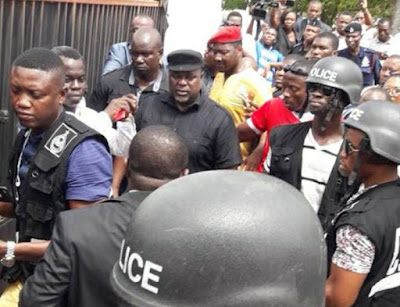 The Ghana Police Service has dropped all charges against deputy General Secretary of the opposition National Democratic Congress (NDC), Koku Anyidoho, ghanacrusader.com says. According to reports, the police dropped treason charges after the Attorney General and Minister of Justice said it is not interested in the case.

The tough-talking NDC politician was picked up at the Accra International Press Center by plain-clothed officers.


The NDC was holding a press conference to react to the controversial Ghana-US Military Cooperation agreement when the personnel in police uniform sought to arrest Koku Anyidoho.

Anyidoho had suggested president Nana Addo Dankwa Akufo-Addo, like his father, will be overthrown in a civil revolt which will begin on Wednesday.

“On January 13, 1972, a certain Col. Ignatius Kutu Acheampong led a movement that removed the Progress Party from power. Busia was the Prime Minister and Akufo-Addo’s father was a ceremonial president. Somebody should tell Nana Akufo-Addo that history has a very interesting way of repeating itself. There’ll be a civil revolt,” he said.

“There will be a civilian coup d’état. There will be a social revolution. We [NDC] are starting it on Wednesday. The movement is starting on Wednesday. Nana Addo will have sleepless nights. He will suffer diarrhea. He said he wanted to be president but we will make sure he will be fed up on the seat,”