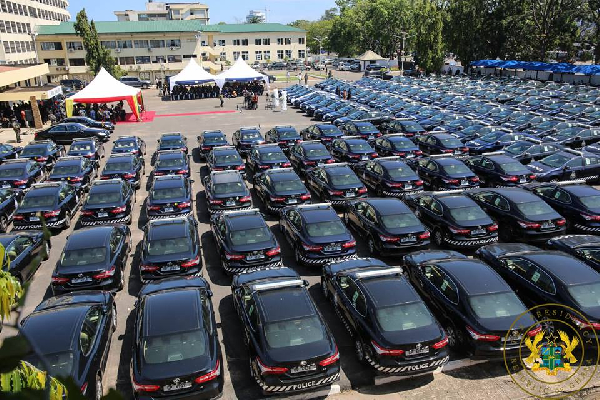 The presentation forms part of government’s moves to equip security agencies with logistics the needed to effectively discharge their duties.


While presenting the vehicles, the President urged the Police Service to “pay particular attention to the proper maintenance of these vehicles and use them to serve and protect the Ghanaian people.”

The President also told the gathering that government had committed resources to procure kits, gears and quantities of other essential equipment, as well as more vehicles for the Police.

Ghc800m for police; helicopters, drones in the offing – Nana Addo

President Akufo-Addo in February 2018, indicated that, the government was allocating some GH¢ 800million to the Ghana Police Service to ensure improvement in its operations.

He said the amount will be used for the procurement of modern policing equipment and gadgets including helicopters and drones to enhance the capacity of the service in dealing with crime in the country.

In his 2018 State of the Nation Address, President Akufo-Addo said the government is committed to resourcing the police with the necessary equipment to ensure that it carries out its mandate of enforcing law and order in the country.

Today’s presentation to the police comes few days after the President announced that his administration had procured over 130 vehicles for the Ghana Armed Forces to facilitate their transportation needs.

The President had indicated that the procured robust cars and motorbikes were due to arrive in the country in the next two months.

Speaking at the graduation ceremony of some 138 officers at the Ghana Military Academy at Teshie in Accra, the President also said government’s plans are far advanced to construct a new army headquarters and a training school for the Ghana Armed forces.

He also revealed that he has directed the Minister of Defense to commence work on asphalting the roads in the barracks.
In his address, the President also said a ‘new state of the art training infrastructure’ will be constructed to meet the demands of the Ghana Armed Forces.

“We have ordered an additional 135 vehicles including; Nissan Hard body pick ups, Toyota land cruiser, Toyota Land Cruiser Prado, Land Cruiser pick-ups and dispatch motorbikes to improve the transportation facilities of the troops. These vehicles will arrive within the country in the next 2 months, and I have directed the Minister for Defense to begin the second phase of the project for the asphalting of roads in the barracks,” the President said.

Adding on to the list of promises to the Ghana Armed Forces, President Nana Addo said the Minister of Defence, Dominic Nitiwul, will cut sod for construction of the Commander-in-chief sports stadium in November.

“Next month in November, the Minister for Defense will cut the sod for the construction of the commander in chief sports stadium program for Garrisons in the country, the first to be built in the Tamale.”