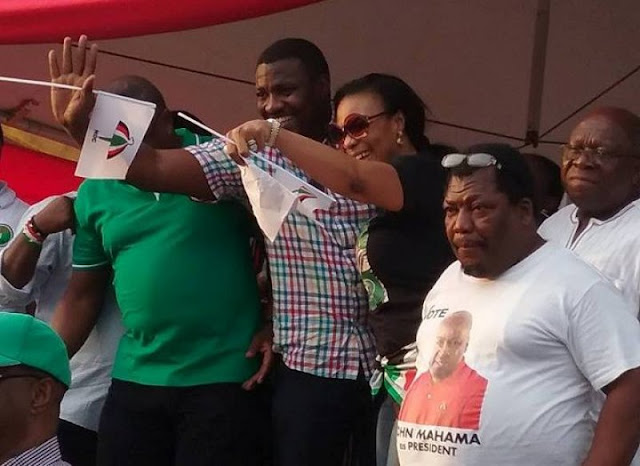 John Dumelo will on Monday announce his intention to contest the Ayawaso West Wuogon parliamentary seat on the ticket of the National Democratic Congress (NDC), sources within the party confirmed to 3News Friday.

Some key figures within the New Patriotic Party and the National Democratic Congress have begun jostling for the seat which became vacant three weeks ago following the death of the MP for the area, Emmanuel Kyeremanteng Agyarko.

Reports emerged Tuesday that the two wives of the former MP were nursing the ambition to contest the seat, a claim which was flatly denied by the second wife of the late MP, Lydia Alhassan.

On Friday, some concerned branch executives of the NDC in the constituency initiated a campaign to push the actor to contest the impending by-election.

According to them, Dumelo who is a known staunch supporter of former president John Mahama has what it takes to the capture the seat which was being held by the NPP, for the NDC.

Addressing the media in Accra, spokesperson for the concerned branch executives of Ayawaso West Wuogon, Justice Tsepo stated John Dumelo will be the ideal candidate, to lead the party in the constituency.

“We are gunning for John Dumelo to represent the constituency in the forthcoming by-election. We all know Mr. Dumelo; he has been with the party for a long time, he is in good standing. He has been with us both good and bad times,” he said.

Mr. Tsepo added: “We think this is the right time for us to give the opportunity to [Dumelo to] lead the party in this constituency.

He said though the constituency is mourning the late MP, the NDC cannot sit idle without following due process, especially when the NPP.

“The NPP is preparing and in this case the NDC cannot sit idle and say because we sympathize with them so we will not take any step. So we are only following due process to prepare ourselves before the 60 days elapse,” he stated.

Mr. Agyarko who would have turned 61 years on December 10, died on Wednesday, November 21 in the United States where he was flown to by his family for medical care.