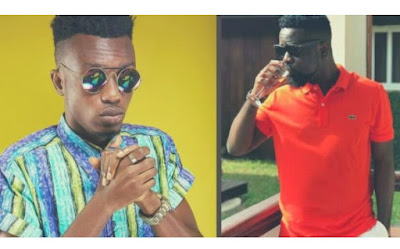 Undoubtedly, the biggest event on our music calendar happens to be the Vodafone Ghana Music Awards (VGMAs) nominees list was announced on Saturday, March 3, 2018.

The announcement of the nominees was met with a lot of qualms from some music acts and their fans. Rapper Dadie Opanka’s ‘Wedding Car‘ music video is in contention for The ‘Best Video Of The Year’. However, fans of Sarkodie in their rightful thinking have vehemently opposed Opanka’s 2018 VGMAs slot.

Simply put, the account could not fathom why a video like Dadie Opanka’s ‘Wedding Car’ video could get a nomination in the said category over Sarkodie’s ‘classic’ videos. The tweet is provided below;

Charter house dierr the least said about them the better. All the high quality videos on the Highest album, they didn’t nominate any but their board was able to sit and decide to nominate Opanka wedding car!!! Herh even a toddler won’t do this!! #VGMA2018

The tweet by fans of Sarkodie didn’t go down well with Dadie Opanka as he felt disrespected taking into consideration how he’s working tirelessly to prove a point in Ghana music. As such, he responded accordingly in a way that sounded he’s pissed off. See his response below:

U disrespect an artist who doesn’t have anything to do with ur issue to support ur artist? Is it cos u lack common sense or u didn’t grow up in a home?

Even a toddler with no sense won’t tweet this… SMH @Sark_Daily https://t.co/Uj4rVhQOpB

As a reminder, the nominees for this year’s VGMAs Best Music Video of the Year category are;