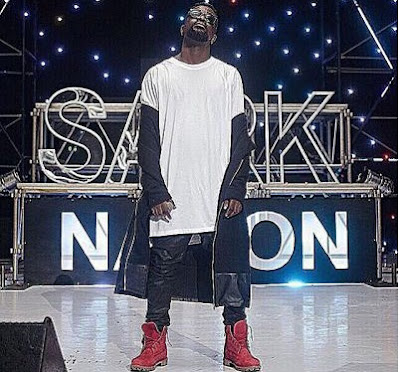 African rap mega-star Sarkodie (Michael Owusu Addo) returns to Europe and the US with a bang! The tour, in honour of his upcoming fifth solo album “The Highest”, sees him on key stages in Norway, Germany, Denmark, Sweden, Belgium, France, Holland, Italy, France, Spain, among others.

His New York City gig last night was among his highly anticipated stops. The rapper set out to replicate his iconic History in the Making Concert (in which he filled up the famous Apollo Theater years ago). This year, he took the concert to Hammerstein Ballroom.

A packed venue saw the “Mary” hitmaker render an energy-filled performance for over an hour, dishing out several of his best-known hits. He was supported by highlife doyen Amakye Dede, sultry chanteuse Efya, label mate Akwaboah, comic actor/musician Kwadwo Nkansah Lil Win, as well as UK band The Compozers.

Sarkodie resumes the tour on September 29 in Hungary.

A BET laureate, Sarkodie is also author of Makye (2009), Rapperholic (2012), Sarkology (2014), Mary (2015), as well as the joint album TMG with producer Jayso in 2013. He is CEO of his independent imprint SarkCess Music, which is also home to singer Akwaboah, nd fellow rap act Strongman.

The concert is a partnership between TM Entertainment, and his own SarkCess Music imprint.

Watch a video of his NYC gig below.