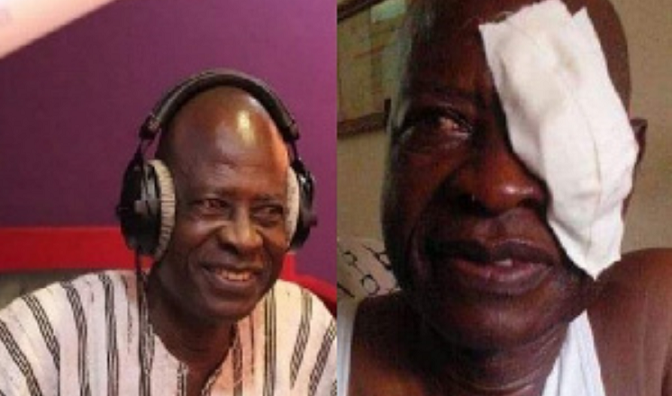 Ailing Ghanaian veteran actor William Addo is currently with no electricity as Electricity Company of Ghana (ECG) disconnects his electricity over GHC5,000 debt.

According to William, who lives at Tefle in the Volta Region, he has no electricity in his house because he owes ECG over 5,000 cedis.

William Addo, popularly known as Akpatse, disclosed this during an interview on Citi TV this week.

He also detailed other challenges he has been facing since retiring from the Ghana movie industry.

William got candid about the struggles he has been through since going totally blind 5 years ago, saying “Occasionally, there are other ailments that come into play.”

“Last time, I was rushed to the hospital for cardiac arrest and had to spend 6 days there. It was not easy at all because I almost went (died) just like that” he further added.

Through the interview, Akpatse appealed to the public to support him to start a corn mill business (known locally as nika-nika), which according to him, will provide a sustainable source of income to fund his medical bills.

Respected as one of the pioneers of the film industry in the 90s and early 2000s, William is famed for his roles in movies like Death After Birth, Chronicles of Odumkrom: The Headmaster, Children of the Mountain and GTV Thursday Theatre.

Ghanaian diva, Mzvee, has left her fans teary after sharing her depression story for the first time while speaking in an interview on YFM with Kojo Manuel

The singer who has won the hearts of many Ghanaians with her melodic voice and truckload of hit songs recounted how she thought her music career has ended after she exited Lynx Entertainment.

In the course of the interview, she also added that she felt the world was crushing on her and all hope was lost because she had no idea of making it on her own as an artist with no record label.

During that period, she claims to have fought herself every blessed day because she was confused and even contemplated quitting music. READ fill Article here