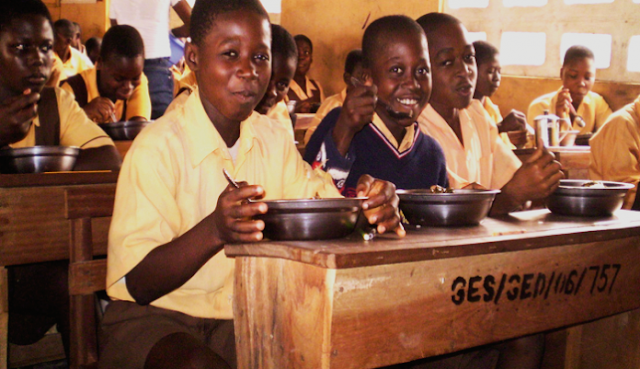 The audited accounts of the Ghana School Feeding Programme (GSFP) has led to the retrieval of GH¢2.1 million out of GH¢2.5 million overpaid to caterers of the programme between July and August last year.

The Ghana Interbank Payment and Settlement Systems (GhIPSS), the payment bureau for the GSFP, confirmed that between July and August there was about GH¢2.5 million overpayment to some caterers across the country but explained that almost GH¢2.1 million had been retrieved.

The Chief Executive Officer (CEO) of the GhIPSS, Mr Archie Hessey, explained that his outfit only worked on the data that were provided it by the school feeding secretariat.

“We only pay according to the list and data provided us by the school feeding secretariat,” he stated.

The audit showed that many caterers across the country were paid more than double what they were due for feeding grants.

A query dated August 15, 2018, seen by the Daily Graphic asked Dr Adu-Nsiah to explain why disciplinary action should not be taken against him for the misrepresentation in the administration and operation of the GSFP.

“You are requested to explain why disciplinary action should not be taken against you for supervising numerous acts of overpayments, underpayments and duplication of payment at the Ghana School Feeding Programme.

“The anomalies have created a lot of distortions, difficulties and misrepresentations in the administration and operations of the GSFP,” the query, signed by the acting Chief Director of the ministry, Mr Alfred Adu Obeng, stated.

It came from source

When contacted, Dr Adu-Nsiah stated that the overpayment to caterers of the programme came from the source where the enrolment data were generated.

“We have instructed all those who were overpaid to refund the balance into the account of the secretariat at the Bank of Ghana,” he said.

Dr Adu-Nsiah accused the former minister of constantly interfering in his work.

“The system was not allowed to operate freely as it should because the minister was constantly interfering in our job,” he said, adding that “she virtually took over the payment processes”.

Dr Adu-Nsiah said he was yet to formally respond to the query because the payment processes were still ongoing and that when the process was complete, he would formally respond.

But Ms Djaba has denied any involvement in the payment systems at the school feeding secretariat.

“I don’t supervise overpayment; it is the work of the coordinator. When I took over from Madam Oye, we didn’t have that problem; it is under his (coordinator’s) watch that they have become too many,” Ms Otko stated.

When contacted, the Deputy Minister for Gender, Children and Social Protection, Mrs Gifty Twum Ampofo, said she had a number of complaints about overpayments, leading to the coordinator being asked to ensure that the process of payment was properly audited.

“The internal auditor had explained to us that the data from the districts had few problems and also because the payments were done in bits and pieces, which was why there were some overpayments,” she said.

“At a point in time, they had paid some people and lost track of the payment they had made because they were not following a particular pattern,” she added.

Earlier this year, a SEND-Ghana report indicated that inconsistencies in school enrolment data provided by directorates of education, schools and caterers made it difficult to determine the actual number of pupils who were fed and whether the government paid the caterers for their services.

“This situation predisposes the programme to financial leakages,” the report said.

Although adopting the caterers’ model for service provision was laudable, it said appropriate storage facilities and the quality of food prepared could not be guaranteed, having recognised the limited supervision and monitoring by programme  officials.

AirtelTigo,MTN And Vodafone Charges To Be Increased By Nov.1