I Will “beat” Shatta Wale – Bulldog 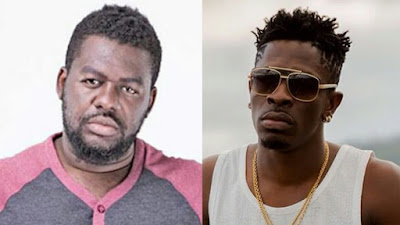 Bulldog says he won’t hesitate to beat up Shatta Wale when it comes to winning the heart of dancehall act Ebony.

Bulldog, born Lawrence Nana Asiama Hanson, has on several occasions jovially declared his love for Ebony and has stated that he would have married her if he was still single.

Meanwhile, self-acclaimed dancehall artiste Shatta Wale, in a video posted on social media said that he wishes to marry the ‘Sponsor’ hitmaker so they become the Jay Z and Beyonce of Ghana.

On Daybreak Hitz on Hitz FM with Andy Dosty, Bulldog’s attention was drawn to the interest Shatta Wale has shown in Ebony.

Bulldog, who once managed Shatta Wale, jokingly said that he will beat the ‘Kakai’ hit singer if he tries to compete with him over Ebony.

“Ebony is my girl. I would have married her if I was single. Besides I’m in talks with my wife to prepare for a second wife. If Shatta tries to compete with me over Ebony, I will beat him,” he said.