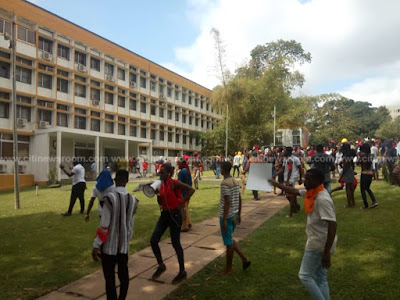 Lecturers at the Kwame Nkrumah University of Science and Technology have declared an indefinite strike over the government’s dissolution of the university’s governing council.


The lecturers said they do not support the government’s arbitrary decision without due consultation with them and also sidelining the Vice Chancellor of the University from the interim council.

Citi News’ Ashanti Regional correspondent, Hafiz Tijani, said the lecturers after a meeting on Friday said they will not return to the lecture halls until the government addresses their concern.

“They say they are not happy about happenings at the University. He said on Monday they saw demonstration by students that led to destruction of properties and none of the students has been sanctioned over their actions…. [They also said] the government has brought in an interim governing council without the Vice Chancellor [Prof. Obiri Danso] being part of it. They are [also] not happy about the inclusion of the SRC member who declared the demonstration in the interim council… They are also raising concerns about the interim council that has been set up. They are not ready to work with the interim council and they do not recognize the interim council so for them from today, they have started the strike and if the school should resume within 14 days, they are not going to the lecture halls, until these concerns are addressed by the government”

The government on Thursday constituted an interim University council after it dissolved the previous one following a high-level meeting it held with all stakeholders in the Ashanti Region over the impasse between the University Authorities and students that led to a violent protest by the students earlier on Monday.

The government said the interim council will be chaired by the Paramount Chief of Bompata Traditional Area, Nana Effa Apenteng for the 3-month period it has been given to serve.

The new council is also expected to expedite the reopening of the university.

The government’s statement in justifying the need for the new interim governing council said council was “not in a position to review its own processes and decisions affecting the student body to guarantee peace.”

But the local chapter of UTAG in a statement signed by its President, Prof. Eric K. Forkuo, indicated that it is opposed to the dissolution as it “frowns on the autonomy of the University and smacks of political interference.”

It also wondered why government failed to resort to the existing Act and Statutes in resolving the issue. Some reports have suggested that the national association is also against the decision, and may hold an emergency meeting on Friday in that regard.

During the protest, over 40 private cars belonging to lecturers were damaged by the rampaging students.

The Students’ Representative Council (SRC) of the Kwame Nkrumah University of Science and Technology (KNUST) led the demonstration following the arrest of 10 students and one alumnus of the school.

The Executive Council of the SRC said the demonstration was necessary to end the management’s neglect of students in decision making.

The students were arrested for a holding vigil on campus without permission according to the school authorities.

One other student who was allegedly manhandled by the internal security was hospitalized.

The KNUST management however justified the arrests, after the students were released on Saturday.