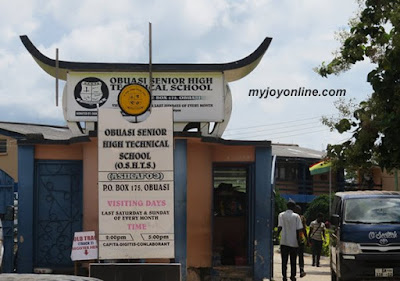 The 17-year old girl who is a victim of an alleged sexual assault at Obuasi Senior High Technical School in the Ashanti region has revealed, an official of the Ghana Education Service coached her to deny that the teacher forcibly had sex with her.

The 47-year-old teacher and housemaster Seth Amponsah is being investigated by the GES after he denied the act.


Seth Amponsah has admitted the girl swept his office and studied there at night. He also admitted buying food from town for the girl and intervening when a senior seized her phone.

But he denies sexually assaulting her. Some teachers of the school, however, say sexual relationships between teachers and students of the school has become a ritual

Joy News has sighted a petition written by a group of teachers calling themselves Concerned and Patriotic Teachers of Obuasi Senior High Technical School.

According to the teachers who have petitioned the MCE, when a male teacher of the school died of HIV/Aids complications two years ago there was panic in the school because the teachers often passed the girls around.

The petition, which was written in July and addressed to the Municipal Chief Executive, alleged that the school authorities wanted to shield Mr. Amponsah and called for the intervention of the MCE.

The victim of the alleged sex assault has told Joy News an officer from the GES, David Baba Afuubi invited her into a meeting and told her not to cooperate with investigative bodies.

The headteacher of Complex JHS in Obuasi, Aaron Boafo and the Senior Housemaster of Obuasi Sec Tech, Yacubu Mambo, were present at this meeting.

They confirmed the meeting was held in Mr. Mambo’s house but denied the GES official tried to scuttle the investigation.

Aaron Boafo said Mr. Afuubi advised the girl not to cooperate with outsiders and the media.

The MP for Obuasi East, Dr. Patrick Boakye-Yiadom, who is an old student of Obuasi Sec Tech says the sex scandal which has become public is a tip of the iceberg.

Read Also:Chinese Company To Take Over A1 Bread For $5 Million