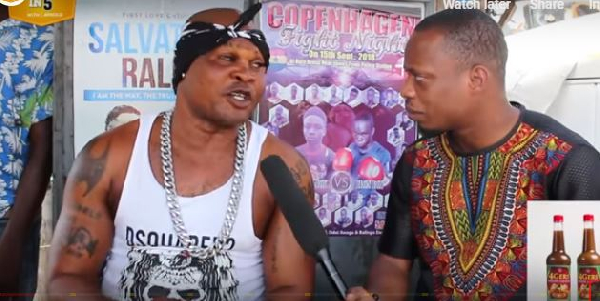 Ghanaian boxer, Braimah Kamoko aka Bukom Banku after bleaching his skin and referring to himself as Ghana’s Micheal Jackson has done the unthinkable.

In an interview with Arnold of Vibes in 5, he was sighted wearing eyelashes and when queried, he stated it was for the fun of it and nothing else.

According to him, he wore it to an outdooring and sees nothing wrong with it since everybody in his area knows he’s a comedian.

Banku was once reported as saying: “I am bleaching myself for German people to know that German peo­ple and Bukom Banku are one…. So if you see me now, you will observe that I am from Germany. I want Ghanaians to know that I am a German now,” he said.

watch the video below