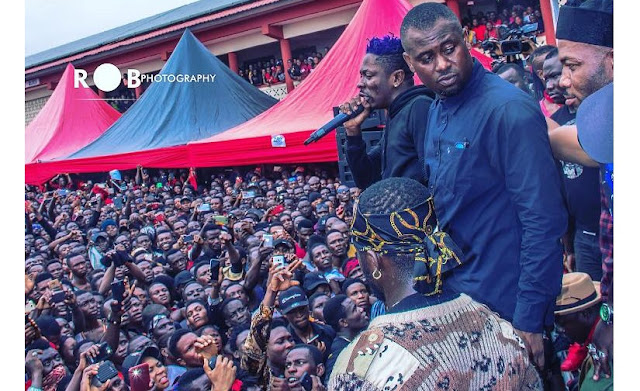 The One-Week celebration of the late Priscilla Opoku-Kwarteng is over but certain events happened at the venue, St. Martin De Porres School at Dansoman, a suburb of Accra that cannot be forgotten.
Whilst well-wishers were busily mourning the ‘Sponsor’ hit-maker with others jamming to songs of popular musicians who stormed the stage to perform, a group of young gentlemen were also spotted at an area seriously exchanging blows.

The scene which flashed on UTV when the station broadcasted the One-Week celebration captured the group fighting like that was their purpose at the funeral ground.

It is not clear what caused the fight but Ghnewslab.com is very sure that a misunderstanding occurred between both sides which ended with the brawl. A police officer was seen at the scene calming nerves but it was not an easy task for him.

Several personalities were at the One-Week celebration of Ebony which happened on February 18. The late who died on February 8 this year will be buried on March 17, �2018.

Watch the fight below: