Suhum Senior High Technical School (SUTESCO) has been hit with furniture shortage, with most first-year students admitted under the newly introduced double track system, struggling to get desks to sit on to learn.

Starr News’ visit to the school saw some of the students standing while others lean against the classroom walls over a lack of desks.

The situation is affecting teaching and learning.

School Authorities have since converted dining tables and chairs into desks for the students to ameliorate their plight as the school awaits the Ghana Education Service (GES) to come to its aid.

According to sources in the school, whenever desks get damage, instead of them being rehabilitated, they are rather used as firewood, leading to the crisis.

The headmaster Dr Kwabena Kwakye Yeboah was unavailable for an interview during the visit. The Assistant headmaster in charge of academics also declined to speak on the matter. 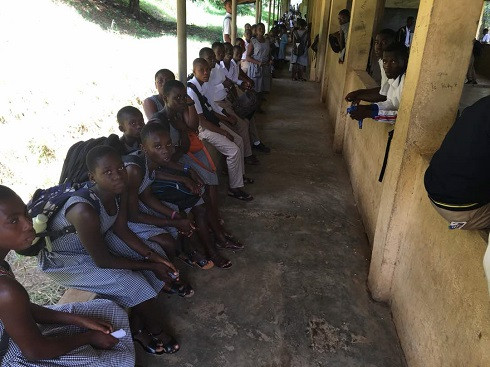 Over 400,000 students are taking part in the double track system introduced by the government.

The system, which began this September will see one set of students in school while others are on vacation. The students have been put on green and gold tracks with the students on green starting school this month while those on gold tracks resume school in November

The double tracking system is expected to last for seven years and it is a stop-gap measure employed by the government to accommodate the surge in enrolment under the free SHS policy.

The Member of Parliament for Ketu South Fifi Fiavi Kwetey said the introduction of the double tracking system is a clear indication that the government has woefully failed in the implementation of the free SHS policy.

“The double-track system is simply an admission that we have completely failed as a government to make the proper provision for infrastructure,” the former Deputy Finance Minister told Ibrahim Alhassan .

“NPP has been trumpeting free SHS since 2008 and all these while you did not know that you needed the necessary investment to expand infrastructure based on the numbers as you could see. It’s clearly an indictment on the government of the day,” he added.