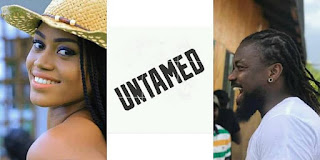 High-grade general Samini has been mocked on social media for allegedly copying the title of the debut album from eShun “UNTAMED”.

According to the songstress better-known as eShun did reveal that she was supposed to launch her debut album titled “Untamed” earlier this year but was postponed due to the sudden demise of female dancehall artiste Ebony.

Which she had already released two singles off her Untamed album this year, ‘I Want‘ and ‘Akyia’.

However, in a post sighted on Facebook over the days reads that the “My Own” hitmaker did reveal the title of his upcoming album which contrary bears the same name to that of eShun’s own.
he Facebook handle of the High-grade general was set on fire as some fans bashed on him hardly.

“Oooooh Samini you are a legend…, you shouldn’t have copied this from an upcoming artist….eShun did announced this ‘UNTAMED’ over the year…….please aint you that creative enough to have named yours differently? Hahahahahaha haha????????????????????” Smith Ama a facebook slay queen mocked Samini.

According to some entertainment pundits, Samini debut album titled ‘UNTAMED’ has the same spellings as eShun’s. And since that of eShun’s was announced years ago, Samini, therefore, copied from her.

As a result, Ghanaians especially social media users are of the view that the ‘My Own’ hitmaker is not being creative enough to title his 7th album with a different name.